“Paintings From the Old World” in 3D: Gianni Politi

This time in our series of reviews we visit Gianni Politi’s digitized exhibition through a three-dimensional model created by Walter’s Cube. This technological innovation lets the visitors enjoy the artworks in a proportionally scaled digital twinspace in real time, where walking around and interacting grows into an immersive experience thanks to the Online Viewing Room.

Designers and fashion critics like to say things like “state of the art” in reference to pieces of clothing. But then why do people wear them? Sounds like a dumb question, but it’s embedded in the tradition of treating art as useless beauty, at least if we are talking about everyday, mundane use and do not include theoretical benefits. To make this point crystal clear, let’s think about how the applied arts can’t seem to achieve the same level of recognition as the fine arts: it’s not a logical thing, it’s a cultural thing, as merely 2000 years ago every artist was considered to be a craftsman, every form art was a form of techne – but respected the same.

Obviously, people wear state of the art clothing because they want to look good, and we consider beautiful the best look out there, but beauty should be futile to be fully appreciated, because not serving any apparent purpose – or even better, being an obstruction to a purpose (think about how unpractical business clothing tends to be) – gives the feeling of being luxurious. Now turn this whole logic around, and what you get is Gianni Politi’s exhibition titled Paintings From the Old World. What if instead of making useful things less useful in the pursuit of beauty, what’s thought to be the privilege of art, we made already beautiful things useful?

Politi hung six shirts from pegs in 56 Henry, made from fragments of painted canvas he found on the floor of his studio by a tailor. This could be interpreted as an environmentally conscious gesture, or the oddly placed and crinkled canvases could be conceived as portraits without subjects, as if he depicted people in their absence or their absence, pushing the limits of what a painting should and could be. But the most interesting take on this series of classic men’s dress shirts must be the one that detects the passageway between beauty and function offered by Politi.

As he comes from Rome, the home of well-made suits, it’s no surprise he made the connection in his head, but the expression of the thought is unique. By commissioning the garments from a tailor he erased the boundaries between artist and craftsman, since it became their collective artwork, even if the other party stayed in anonymity. By overcoming the imaginary fence, he made a tongue-in-cheek commentary on the art history of the last thousand years, and by playing with the folds of vibrantly colored fabric, he created such a structure that almost feels like sculpture. Without the frame, the canvas should collapse in on itself, but the dried paint gives it poise – maybe that’s the spine of the missing subjects, or just the power of art. 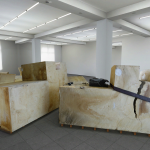 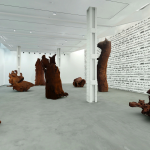 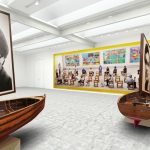 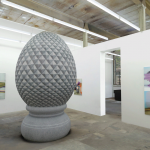