This time in our series of reviews we visit Tilo Baumgärtel’s digitized exhibition through a three-dimensional model created by Walter’s Cube. This technological innovation lets the visitors enjoy the artworks in a proportionally scaled digital twin in real time, where walking around and interacting grows into an immersive experience thanks to the Online Viewing Room.

Past and future seem like opposites, although they encompass the very same thing from the perspective of the present: everything that’s not here, everything that’s not true at the moment. Tilo Baumgärtel is the master of the game of ‘yet’ and ‘anymore’, as his solo exhibition in Galerie Kleindienst titled Mafant showcases his ability of pushing us out of our time with unexpected details, creating a feeling of instability. One of the alpinists on Sentinel seems to be dressed as a soldier from the 19th century, the swimmers on Kaban are wearing swimsuits from the middle of the 20th century, on Crossroads Power Rangers from the 1990’s meet in the forest, and as a climatic clash on the main wall, the stylized skeletons of prehistoric mammoths walk way from the digital ghost of the pixelated future.

Many describe Baumgärtel’s paintings as dreamworlds, partly due to their timelessness, partly due to their eclecticity, which has some roots in said timelessness, but mostly comes from the silent coexistence of reality and fantasy. The compositions are not just strange, but utterly absurd. What are pelicans doing around a manhole that turned into a fountain in a steampunk city? But they are uncannily believable, which is, of course, one of the main features of a dream, probably because “his staged spaces have an extraordinary unity as painterly compositions”, as Christoph Tannert put it. The illusion of coherence never breaks:  Baumgärtel, like a good magician, works all his theatrical tricks to place his passive characters in a way that feels natural, even though it’s never clarified what counts as natural.

Wild boars out in the wilderness are natural – people floating next to them in a body of water so artificially blue it has to be a pool, is not. The air of nostalgia emanating from the swimmers makes us think of post-catastrophic, or maybe post-apocalyptic scenarios, that could only be contextualized through posthuman and postanthropocen concepts as of 2020 because of the predominant philosophical climate.

That leads the filmic settings into the genre of horror or sci-fi, as there is something looming and mysterious about the dramatized light-dark contrasts derived from social realist works and propaganda posters. The foreboding quality of posthuman horror is not far from the unsettling seriousness of posters, as they both carry a threat in the form of a warning for the future. Most importantly, they both provoke a reaction as Baumgärtel set out to: “I see myself as a hinge between people asking questions on all levels, and as an agitator who presents his findings and tries to capture madness, beauty, questionable things and strange things in pictures in order to create a certain resonance.”

Even though Baumgärtel likes to overwhelm the viewer with pictures that feel like dark prophecies from ancient times, he does not lack humor. This manifests in oversized animals, in the exaggeration of compositions, in caricaturistic figures, and in what seems like a wordplay on adres and ardent. As Nils Ohlsen concluded, there is a “thin line between comedy and drama”.

“Paintings From the Old World” in 3D: Gianni Politi

In a Philosophical Sense 1: About Online Exhibitions 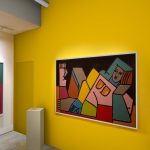